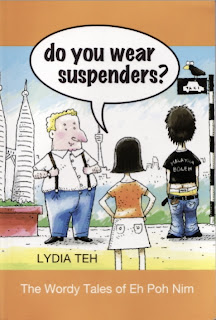 Books that compile newspaper columns are usually as diverting as someone else’s jumbled laundry, but this is a happy exception. It helps that I had never read any of the pieces here before. I mistook Lydia Teh’s Word’s Up, Eh Poh Nim? column in The Star for some kind of simple grammar guide, so never felt compelled to go any further because I have been told that my Englands is already quite well.

Well, the joke’s on me! The column actually reads like a serial novel. Sure, it doesn’t have the relentless pace of, say, Armistead Maupin’s Tales of the City, but the story definitely builds. Like several other serial novelists, Teh creates an affectionate and occasionally exasperated portrait of a city as seen by several closely observed characters. In fact, Do You Wear Suspenders? turns out to be a love story!

The eponymous (geddit?) protagonist is a single woman with the annoying habit of always correcting other people’s word usage. Even when visiting a friend in hospital, she scolds Clara for writing ‘complement’ instead of ‘ compliment.’ (The reason Clara is writing is that the poor thing is not healthy enough to talk.) Instead of flinging her filled bedpan at her, Clara just lies there and takes it all in.

And so it goes. Eh Poh Nim (the name is always spelled in full) has several talky escapades that help illustrate concepts like alliteration, hyperbole, puns, metaphors and similes. She has memorised the origins of many idioms and phrases too: “Trojan horse” is easy enough, but how many of us know where “below the salt” came from?

One of the most fun chapters has Our Lady of Pedantry instructing Australian mates on Manglish terms, which is how the title of the book came about. We use suspenders to refer to something worn underneath, rather than to hold up, men’s trousers. Another favourite has an ending where we are taught that ACDC is slang for bisexual, which you can never be too young to learn.

Strangely enough, Teh doesn’t take advantage of the interesting origin of the phrase ‘half-past six.” When a former Prime Minister (guess which one!) used it to describe the new leadership, I never realised it was a local expression. It comes from the early days of the Selangor Club in KL, where Eurasians were permitted to be at the bar only from 6:30pm onwards – when the whites would be away, preparing for dinner. So the term was a racist one to mean second-rate. (My source is this novel).

I sometimes felt like throttling her, but I feel the same about many of my friends, so I guess Eh Poh Nim became a friend. Besides, her compulsive desire to educate is a way to conceal (wouldn’t you know it?) a certain loneliness. While fending off an oafish colleague named Paul, she grows interested in Gene Rick, whose charms prove to be anything but generic. He, too, is a sticker, I mean stickler, for using the correct words, so you imagine a very happy future of matching thesauri on the bedside table.

But the path of true love is filled with sticks and stones, … or words to that effect. Eh Poh Nim first needs to make sure none of her friends or family members bludgeon her to death for always reminding them not to pronounce words to become ‘Grand Pricks’ or ‘fox pass’.

Unlike the sterile conversations in our textbooks, her mini-adventures never exist in a vacuum. (This book has far too much pork to qualify as an MOE text, anyway). There are many delicious references to contemporary controversies: the mansion built by dubious Malaysian politicians, the sex scandals of Hong Kong stars, the agricultural study trips to Taiwan, and so on. Even the romantic clincher in a park involves a hilarious cameo by killjoy khalwat-busters. Perhaps in a decade we would need footnotes to get all the jokes, but to present them unadorned adds to this book’s cheeky, faux-naif charm.

Faux-naif is a word we are not taught to pronounce properly here. Dare we hope for a sequel?

"half past six" - I have always loved hearing this expression :)

Will definitely check this book out.