Malaysian filmmaker Chris Chong Chan Fui’s KARAOKE will be screened at the Directors’ Fortnight of the 62nd Cannes Film Festival from 14-24 May 2009. It will be the first Malaysian feature film in 14 years to be screened at Cannes. KARAOKE has also been nominated for the Camera d’Or (Golden Camera), the award for the best first feature film presented in any one of the Cannes' selections (Official Selection, Directors’ Fortnight or International Critics’ Week).

Contacted by phone in Bangkok, where he is currently finishing post-production, Chris could not conceal his surprise: “Cannes is totally unexpected. It is such an honour to be part of the biggest film festival in the world and be screened alongside a film by Francis Ford Coppola!”

KARAOKE is Chris’ first feature-length film. Prior to this, the Sabah-born film director and media artist has received worldwide acclaim for his short film BLOCK B (2008), and the documentary KOLAM (2007). 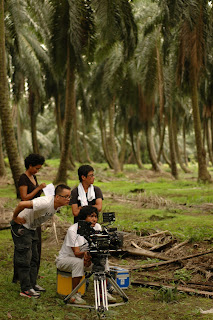 Produced by Chris’ own Tanjung Aru Pictures, the 75-minute Malay-language KARAOKE was shot on location in Selangor over 12 days in December 2008. But even before the film was shot, KARAOKE was invited to the Berlin Film Festival’s Script Clinic in 2007, and was selected to participate in the Hong Kong-Asian Film Financing Forum (HAF) in 2008.

During the day, Betik helps shoot karaoke videos, while at night, he lends a hand to his reluctant mother at the family’s karaoke joint. This is the place where he falls for Anisah. A job, a love and a family. His return home comes together quickly.

But life isn’t so innocent. Everybody wants something. Subtle manipulations driven by self interest and personal desires seep through yet the songs continue to be sung. Unwavering.

The home has changed. The oil palm trees have grown in endless symmetry. The landscape rusts and the nostalgia turns.

About the Directors’ Fortnight at the Cannes Film Festival

The Directors’ Fortnight has long been a platform where newcomers can shine, highlighting new talent in world cinema and the directors of tomorrow. Initiated in 1969 by the French Director’s Society, its program includes a selection of films from around the world, during the Cannes Film Festival.

As one of the programmes held in conjunction with Cannes, the Directors’ Fortnight is open to the general public. In 2008, over 40,000 spectators attended its screenings.

I hope they make another trailer: this one has no singing at all! The songs are great.

that was me, the way. forgot to put the name.