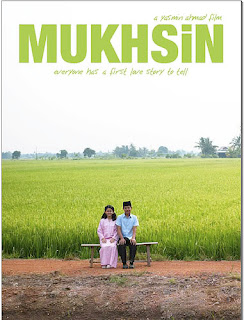 Since this is the last Pulp Friction column, we will celebrate by doing something different! And so the text we will discuss is a film rather than a book.

My memories of Mukhsin are inextricably linked with the circumstances in which I first saw it. It was at the Berlin International Film Festival 2007, a full house with almost a thousand people.

When it started, it was safe to say that most people there had no image of Malaysia. But when it ended, the applause went on for over five minutes. I wasn’t involved in the making of the film. But if the pride I felt at that moment could be bottled and sold, it would be the most potent power drink ever.

Mukhsin is deceptively simple and functions as a fable about the end of innocence. We follow two kids, the 10-year old Orked and the slightly older Mukhsin, as they spend a few weeks together. You can almost say it’s summer if Malaysia didn’t have summer all year round. The enveloping warmth is palpable; the characters are framed in an almost Edenic natural environment.

It’s puppy love, which the Malays here would call monkey love. But Mukhsin is also ‘about’ many other things without being unduly didactic: class, faith, gender, race, little cruelties and redemptive sympathies. Its serene humanism remembers not only the raw pull of emotion but the cheeky thrill of naughtiness.

Any Eden will have snakes. Sour notes are provided by Mukhsin’s bitter older brother, and Orked’s family’s mean-spirited neighbour. Everyone is created by a home environment, and we get enough glimpses of how the attitudes of these killjoys were created. A stand is taken against such life-denying carping, but it’s done with graceful ease.

The director’s favourite scene is where Orked’s precocious and relatively privileged family dance to a record, while Mukhsin, standing outside their house, looks in on them. He is happy for them but also envious, since his own family isn’t nearly as harmonious.

My own favourite, which is an odd choice, would be where Orked’s maid explains how she makes ais krim Malaysia. Basically, you can’t appreciate the sweet unless you also have the bitter. It is the director’s storytelling credo, but presented with such blithe nonchalance that you smile rather than feel lectured to.

Also in that scene, the actress stumbles on a line but then covers it up by saying she’s nervous at getting a visitor! This is wonderful. Other filmmakers would have yelled “Cut!” But by using that take, the film becomes all the more transparent and charming. You can’t celebrate humanity without accepting that we all flub once in a while; it’s how you bounce back that counts.

The film has a supple quality; it sculpts with light and time. Which makes it even more tragic that the official Malaysian DVD is of such low visual quality. (A much better DVD was apparently released in The Netherlands, and I’m sure other countries will follow suit).

This film is, in the order of release, the fourth in the ‘Orked quartet’ that began with the made-for-TV Rabun three years earlier, followed by Sepet and Gubra. But in terms of the character’s chronology, it comes first. It also ends with the director’s own voice-over (the only time we hear it in the quartet), wishing that Mukhsin found his own love, too. In the end, fact and fiction, reality and celluloid dreams, immediacy and nostalgia, all blend together.

Away from the cold and wet Berlin weather on that day, Mukhsin had me thinking warm thoughts. And I was surely not the only one.

It wasn’t an entirely ‘happy’ ending: Mukhsin, if he were not careful, might also be consumed by the anger and despair that affected his brother. The crucial factor would be whether he was open to the love that exists all around him, for him, if he would only realise it. This love takes on a divine quality with the theme song Hujan, where (seemingly unusually for a story not set among farmers), rain is proof of blessing.

And blessings indeed can come in many forms, and sometimes from the most unexpected people. The works of Yasmin Ahmad will be viewed and discussed for as long as we hunger for an inviting place called home. Ameen.

"Basically, you can’t appreciate the sweet unless you also have the bitter."

She taught us all of both the bitter and sweet to the last of her material days. She is beautiful, and I miss her dearly.

yasmin was very cynical to her crticis..

Yes, she knew how to be naughty, all right. That's why I don't recognise those descriptions of her as an 'angel' and so on, since she was surely more human -- and more colourful/interesting -- than that ;-)