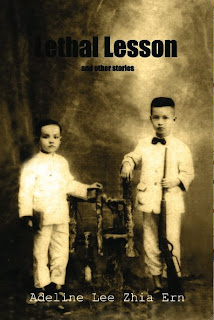 Adeline Lee is not the first teenager to publish a book this year. A few weeks ago we talked of Nik Nur Mahidah, also 18, who shared her spiritual and motivational tips on how we can, like her, get 20As for SPM.

(What happened to all the boys? Are they all wannabe rempit and ah long who aren’t interested in the written word? There’s just no hope for some folks, I tell ya.)

Aside from their age and the determination that these two self-possessed young women display, I wonder if there are any other resemblances? The story in Lethal Lesson that reminded me most of Nik Nur Madihah’s memoir is “A Father’s Love,”  because the titular parent happens to be a fisherman as well. But Lee’s is a slightly darker vision: the father is a compulsive gambler who thinks that education is wasted on mere girls.

Lee’s book is fiction rather than fact, and since I don’t know her I can’t presume to know how much is autobiographical. But this is a wonderfully assured debut.

I was a little wary of the first story, “I love you grandma.” A 91-year old reminisces about her life, but isn’t it odd that she describes cinema buildings of the 1940s as being ‘old and dilapidated’? Surely they seem so now, but wouldn’t they have been brand-new then?  Ah, but she’s on her deathbed, so maybe the medication is doing things to her.

A much more successful grandma’s-eye story is “Belonging Somewhere,” which might just be the strongest piece here. A different old woman (albeit a sprightlier 82) was born in China and came to Malaya decades ago, but still finds it hard to adapt. She’s aghast at the way her granddaughter “used to speak Hokkien, but the dialect has slowly disappeared from her vocabulary, like colour fading from a frequently washed shirt.”

Against the inflammatory and politically bankrupt rhetoric of kaum pendatang, this story brings to vivid life, with well-rounded characters, the hard choices and compromises that have been made by all of us. The story is also significant for being the only one with a supporting character who is not Chinese: the old woman’s daughter is dating someone named Kassim. (I don’t know if Lee consciously chose this name to evoke the film Ibu Mertuaku, where another Kassim didn’t get along with his mother-in-law either, but with more tragic results).

Many of the stories take place in Ipoh (where Lee lives), but this isn’t the multiracial milieu of Yasmin Ahmad’s films or Lat’s Town Boy. In that sense, it does bear a striking resemblance to the exclusive ethnic enclave of Nik Nur Madihah’s Kelantan.

Another of my favourites is “Imaginary”, an old-fashioned ghost story that evokes The Turn of the Screw. The chills and familial tensions are superbly controlled; I can see the J-horror remake right now.

Most of the stories are very much grounded in the realism of multi-generational families. Only a couple, like “Mermaid” and the title story “Lethal Lesson” push forth into more fanciful territory; the former has a scaly creature much less lovely than Maya Karin in Duyung, and the latter has girl assassins!

I think she evokes various situations pretty well, but the stories of school have a particular resonance. Her school-going protagonists don’t have much luck: she ranges from fat and dangerous (”The evil one”) to being mildly insecure at not getting straight As (“The Score”). I don’t know if reading Nik Nur Madihah’s book would help them, though.

Lee can also portray something that not many writers, of any age, can do well: happiness. A teenager being nice to a neglected man in an old folks’ home, or a young mother speaking to her infant (who chooses to “look silly” only when a snootily judgemental adult visits), a moth being set free – these are the colours we should celebrate.

The fact that she injects these little shots of happiness without too much sentimentality is already a gift. But her palette is richer than that. To use a reference from before her time: The future’s so bright, she’s gotta wear shades.

"What happened to all the boys? Are they all wannabe rempit and ah long who aren’t interested in the written word?"

You know about Maria Chin's survey, kan? All wannabe rempit.

Encik Amir, the boys are not going to mess with literary endeavors, they'd rather be amateur videographer, not the ones we'd be seeing in cinema anytime soon though.

I must say that it seems to me that our boys seem to feel that writing words of your heart does take a bit more courage than it takes to do a "superman" on a cheap "kapcai" or demoralizing the weak for extra pocket money.

"Emotions are as hard as stone"

Actually, I have a friend who's published two books (fiction) this year and last year. They're in Chinese though. And, he's a guy.

Interestingly, the three of us are all studying in the same college =)

You can't get this book anymore. All copies of this book have been withdrawn and pulped, because one of the stories is plagiarised! But I am holding on to my copy :-)