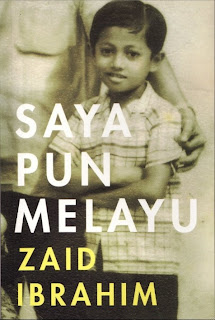 This is a well-timed missive. While the author’s first book In Good Faith (2007) was cobbled together from speeches and essays, Saya Pun Melayu has the more coherent feel of a sustained argument.

I hope that, instead of snoozing through speeches, delegates at a certain party assembly can while away the time in a crowded, air-conditioned hall by reading this instead. It will prove much less soporific.

It’s not for nothing that the first other local book he cites is Dr. Mahathir’s The Malay Dilemma. Both of them were by opinionated politicians who had previously made names for themselves in non-political fields, and written right after they were expelled from UMNO!

But there are differences, too. The Malay Dilemma was first written in English for a British publisher, while this is in the ancestral language of the people it most urgently addresses. This has nothing to do with the ethno-nationalist credentials of either man, just differing realities of the publishing industry.

A more important difference is that while the older book had an “Us vs. Them” worldview, this seeks to articulate a Malay nationalism that is simultaneously a Malaysian nationalism.

If Saya Pun Melayu is also a wake-up call, it’s less for any particular hegemonic party to reform itself, but for the Malaysian polity as a whole to reorient ourselves to a new scenario where justice and accountability must become more important than ethno-centric conduct.

Zaid Ibrahim starts by reminding us that he is our shortest-serving Cabinet Minister ever. (Compilers of The Malaysia Book of Records, take note!) Roped in by the Badawi administration as de facto Law Minister last year, he resigned after only 6 months at the government’s decision to use the ISA against perceived political opponents.

He defends his decision, but wants to do much more. The very title Saya Pun Melayu immediately intrigues. The ‘pun’ (not in the ‘no pun intended’ sense) seeks to break ethnic identification with any particular party. For the Malay race to be vibrant, it should not be “united” if unity means a corrupt, unthinking consensus. Any race necessarily breaks up into different ideologies and inclinations; otherwise, everyone might as well be produced by factory assembly-line.

Two words that keep recurring in this book are bangga and malu. Both simple words, but with deep connotations, and certainly not as emotive or brow-beating as megah and perkasa for the former, or hina for the latter.

He is justly proud (bangga) that he is a self-made man who rose from a low-income background (walking 6 km to school in Kelantan, and even doing his own study in London because, possibly, a Mara scholarship contract made the mistake of not including his tuition fees!) to become a successful lawyer. It would be an insult to assume that all successful Malays had to depend mainly on race quotas to get ahead.

Malu in this book is more interesting. Aren’t Malays embarrassed (malu) to surrender their autonomy, integrity and self-respect to an establishment that commits all kinds of hijinks and discrimination in their name? Shouldn’t Malays also be embarrassed to keep ‘threatening’ non-Malays even though it’s the latter group that pays the taxes to make the government bureaucracy such a generous employer?

It’s not all doom and gloom. He cites examples from past politicians, and artists like P. Ramlee, who didn’t resort to reactionary defensiveness. Those men and women had cosmopolitan ease and principled stances, as opposed to the desperate politicos who play the race card to get ahead.

By being in Malay, this is an important book to indigenise democratic dissent. Words like liberal and (gasp!) secular are approvingly invoked, and their benefits are shown through anecdotes near and far. Asking a Malay-Muslim to imagine what would happen to one of their kind in, say, China if that country preached ‘ethnic Chinese supremacy’ is one such example.

The middle section is a memoir, but there are some tantalising gaps. Was he really so naïve to be shocked, at age 42, that he could not win even a low-level UMNO contest without having a ‘godfather’ from HQ? Why did he join the party in the first place, when his father was an avid PAS supporter? And why don’t we get insider gossip on the workings of UEM, the company that made his corporate name when he was entrusted to represent it?

The last one might be asking too much. Zaid’s vision of a mature society where right trumps might, and where we all have a place in the sun, should be enough to call this The Malay Dilemma Revisited if that title wasn’t already taken by Bakri Musa. There is also impish humour: he affirms the Federal Constitution as the nation’s highest law, regardless of whether we do yoga or not.

Now, anyone can read that book in mother tongue language.

I just wonder..if Zaid against ISA and stuff, why he join UMNO at first place?
its not like.."hey i just get back from oversea and Im brilliant lawyer and can i join your politic party cause Im malay too u know...and then after he join UMNO and BN only he realize "Wah! U all got this ISA thing ah? This is unfair lah..i dont agree woo..."
I mean how?

That's indeed one of the "tantalising gaps" I referred to in the 2nd-last para :-)

But it's still a book well worth reading.

just for the record...he was once disciplined by umno for "politik wang" and lost his position as UMNO kota bharu division head.

people in kelantan once reviled him for challenging PAS state govt plan to implement 'islamic laws'.

he is a man of contradiction (who isn't?) and may have moved on...

Bang, how much is the book? Boleh minta tolong kirim tak? You may send it to Paul's house, and I'll wire you the money?

I've just realized after typing that, that I could've just ordered it online. Bongok kan? Tapi I like to make it personal :p