Back in print: Shamsiah Fakeh 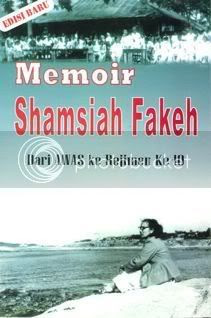 For decades the name Shamsiah Fakeh has been synonymous with rebellion: How could a beautiful Malay girl join the communists and become such a high-ranking member?

Her years in jungle warfare and exile to China have been the subject of much speculation, including unfounded rumours that she killed her child to avoid getting slowed down.

She is back in Malaysia but unwell (in her 80s what). Her memoirs were first published in 2004 but the publisher UKM bowed down to threats by the Establishment and withdrew it from circulation. It has now been brought back into print and can be ordered. I can't wait to get my grubby hands on it.

This story of perempuan komunis terakhir (heh) is a pithy, personal one that defies the orthodoxies of both Right and Left (she ended up leaving the communists anyway); she took risks when others around her opted to go with the herd. Wajib baca!
Posted by Amir Muhammad at 07:38

Got the book this morning (Kinibooks is so efficient!) and am almost done with it. The part where she explains what *did* happen to her baby will haunt me for a long time.

I read this book already.

It is great .... Never knew the details about these nationalist movements before this book.

This woman had suffered much from poverty to war, imprisonment, internal party strife. On the other hand throughout all these, she witnessed some big events such as the breaking up of World Communists and the Chinese Cultural Revolution.

I am sorry and not trying to sound offensive but I recall reading yesterday that Wahi Anuar and Shamsiah Fakeh's son was actually killed one month plus after birth. Wondering how that is possible there is a "Cicit" if the aforementioned is true?

Ah, you will have to ask him :-) Perhaps there was another child, or a step-child, or he was being metaphorical?

Ok let's put the record straight. Saiful is my nephew, her mom is my cousin, her grandma is my father sister. Her grandma and her other sibling 7 of them are the children of Wahi Anuar or Mohd Nor or Wan Chik in Patanni and his first wife Che Dun whom if you have read the memoirs of Mustafa Hussein her name was mention. It was an arrange marriage and she was divorce from him when he decided to be a rebel. His youngest son then was still nursing then.
I know a lot of stories of him but you have to go to my blog and go through it. Her mom and her sister was adopted by Wahi Anuar as his third marriage with our Aunt do not bear any children. So Saiful is now residing at my late grandfather's place in PJ with my step grandma(Aunt) and has a chip on his shoulders that need to break.
We are not sure whether the child with Shamshiah Fakeh is still alive neither do Shamshiah. His actual seath was not witness by their parents, one was in Jail waiting for the gallows( later commuted)another was in the jungle fighting for her life.
I am not close to Saiful that much her stand on Islam which is more form than substance do not appeal to me.

I wanted to buy the movie Apa Khabar orang Kampung and Lelaki Komunis ...
i tried to get it from that Da Huang www but that was unsuccessful la.

Any other method to get hold of the two movies???

I'm a Malaysian studying in Seoul.
Just translated the latest news about this heroine into Korean. ^^
Hope that I can introduce more our historical figures to the Korean society in the future.

I wanted to buy the movie Apa Khabar orang Kampung and Lelaki Komunis ...
i tried to get it from that Da Huang www but that was unsuccessful la.

Any other method to get hold of the two movies???

This guy mirrors my frustration too. So, anyways we can get our hands on these titles?

Vinod. email me lah at info@mataharibooks.com