Selling 'Flower in the Pocket'

Flower in the Pocket is a delightful movie by the young Liew Seng Tat. It recently won the top award at the Pusan International Film Festival – but don't let that put you off! It also won the Audience Award, perhaps the first time a Malaysian film has ever done so.

It is produced by Da Huang Pictures, the company run by Tan Chui Mui, James Lee, Seng Tat and myself. (Yes, I actually go to an office. Sometimes). When Mui asked me to join the company I was sceptical at first; I didn't realise then what a very serious person she is!

People who have seen Seng Tat's short films will know he has a warm but off-kilter and, well, deranged sense of humour. His first feature utilises all his strengths to great effect.

The movie is releasing in limited cinemas from 20 December, but, inspired by the example of Tsai Ming-Liang (on whose KL-set film Seng Tat worked as crew), we are pre-selling tickets from now. Independent digital movies hardly ever gross much when released, partly due to people's perception that these movies are difficult, wanky and/or boring. We wanna change people's minds with Flower in the Pocket. After all, a difficult, wanky and/or slow movie can hardly win an Audience Award, can it?

(Unless, of course, the other films in the festival were even more difficult, wanky and/or boring, but we shall leave that thought aside for the mo).

So! We will be flogging pre-sale tickets at The Annexe Kuala Lumpur this Saturday and Sunday. And some of us will be in costume. You have been warned. Our booth is part of this event: 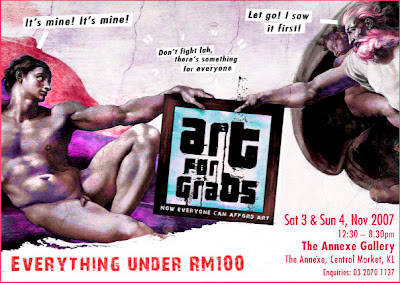 For those who are interested,please log on to : www.dahuangpictures.com/shop