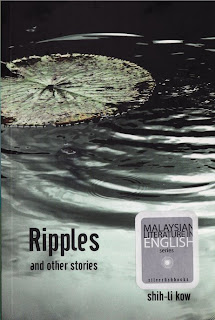 What a nice way to end the year! (Well, I will actually be ending it in the company of several inebriated barely-dressed folks of indeterminate gender, but that’s not the topic for today).

The last local book that I read in 2008 is also one of the best short story collections I’ve ever come across. Shih-Li Kow’s stories first appeared, as far as I know, in the three-writer anthology News From Home (Silverfish, 2007) so it’s great that she now has her own solo book.

It comes with a redundant cover image, no synopsis, and no Introduction; and so we plunge straight into the first of the 25 stories. The first paragraph posits the hypothetical question: Who needs fiction nowadays? Our news, both from home and abroad, has enough elements of farce and tragedy.

It’s a cheeky and audacious way to introduce a new work of fiction. Luckily for us, the ensuing pages skillfully answer the question. If you were getting tired of fiction, this is the place to have your faith renewed in the beauty and terror of the imaginary.

I recommend that you read the stories in order of appearance. Unexpected delights will emerge: characters, locations and events from earlier stories will pop up in subsequent ones, adding shade and dimension to the earlier appearances. Things connect – not in a mystery-solving way, but because even seemingly random occurrences have a history behind them. And since these connections occur in a social environment like Malaysia, they get complicated further by our famously fraught cultural and historical matrices.

The ‘busiest’ story, “A Gift of Flowers,” follows the eponymous bouquet as it goes from one owner to another. Flowers, so emblematically romantic, form an ironic counterpoint to the other elements of the story: suicide, theft, familial tensions. The structure of le ronde brings home the theme of karma.

Flowers pop up in several other stories, most notably “Seeking Frangipani.” A man who has it all decides the glittering surfaces around him are not enough. He seeks an exotic plant as a solution to his ennui, and goes to rather unusual lengths to get one. This story is imbued with a mysterious tension that makes it more than satire or even allegory.

A straight-forward satirical portrait would be “Deep Fried Devils”, a rambunctious sketch of ethnic paranoia and class discrimination. The follow-up story, “Hungry in Guangzhou”, strips away the slapstick to concentrate on the core elements of food and cultural belonging, and has an ending that is quietly devastating.

You marvel at Kow’s ability to switch gears, and her first-person narrations that effortlessly get under the skin of very different people: a Malay girl whose brother just won the lottery, much to their father’s fury; a harried urbanite being insidiously charmed by an old-world shop that is not what it seems; a factory worker who seeks ways to express his resentment.

Subsequent readings might identify dominant themes but for now, I was pleasantly content for each story to take me completely by surprise. One of the briefest stories, “Distraction” is one where seemingly nothing of consequence happens, so how does it end up being so scary? And although the narrator of “Precious Things” was hoodwinked, why do we feel that it’s still a happy ending?

There are tales of ordinary cruelties: indifference that brings forth unexpected results, or subtle prejudices that stop us from seeing. Kow’s prose is often steely and precise; any warmth that emerges is earned. Her small scenarios are so pregnant with detail, and so pliable for extrapolation, that the one story that explicitly evokes a national event (the 1969 riots) ends up being something of an anti-climax.

Ghosts and mysterious beings make appearances, but this is not exotica. (The trip to the very bureaucratic-seeming afterlife in “Waiting for Gurjit” is a dead giveaway). The viewpoint is thoroughly 21st century. But it’s not for nothing that the collection is bookended by tales of garrulous old women (one of whom talks after death). Age and experience will continue to haunt us and suck us in, whether we like it or not. But in the meantime, we have stories.