The shock and the syok 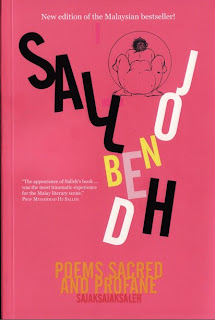 A mat salleh named Robert Frost said that poetry is what gets lost in translation. We all know what he meant, but my case is rather more unfortunate: Poetry tends to get lost.

I have the first two editions (1987 and 2002) of Salleh Ben Joned’s first book of poetry. But they were both lent to people who subsequently misplaced them. So I am right chuffed that Silverfish has reprinted it.

You should be chuffing along, too. Sajak Sajak Saleh (which was the original title) is a bilingual collection that should be bought by every Malaysian, whether for reading or for burning.

Salleh was born in a Melaka village, educated in Australia (where he got up to all kinds of mischief) and was a part of the KL bomehian hub of the 1970s and ‘80s. (He even has a cameo appearance in Lat’s Mat Som, so there). He has held down several jobs but has never let anything as petty as fixed employment get in the way of life.

In its original incarnation, this book appeared to “traumatise” a literary scholar. Salleh is so rightly proud of this that he uses the quote on the front cover of the third edition.

Adibah Amin’s 1987 review is reprinted here, and she says that Salleh’s audacious, polymorphous celebrations of the flesh and the Word, coupled with his placing of the icons of various religions in situations of khalwat (a word we now translate as ‘close proximity’) might very well scandalise society “at this time.”

She was writing in August 1987. Plus ça change, plus c'est la même chose… (which may or may not mean ‘Add up the change, just like your Mama told you’).

I relished the chance to experience anew Salleh’s sensuous energy and rude wit. (Rude in the sense of ‘healthy’, too). He not only embraces life, he does several other physical things with it too, and many of these actions are enthusiastically described here. This will most likely be a shock to the coy, but as he shows in his translation of Marvell’s To His Coy Mistress (one of the greatest, horniest pick-up lines in English lit), coyness is fine if we have all the time in the world. As the sands of time are running out, we might as well get it on.

Salleh’s poetry delights in wordplay and frisky allusions. As he states in his Afterword, the lines between ‘the sacred’ and ‘the profane’ can be rendered invisible if you approach his vision with an open heart. And it is his openness to not only joy but pain (many of the poems are about a daughter who died young) that gives his poems its vital music. The pseudo-pious and the people who wear bush-jackets not only on their bodies but around their hearts will not see this, of course. Then again, a heaven filled with people like those would seem hellish indeed.

There have been several changes made to the original poems. (Like I said earlier, I don’t have the originals with me, but I am pretty sure I remember some). His “Haram Scarum” , which deals with the biggest taboo of the bumigeois (a contraction of ‘bumiputera bourgeois,’ his most inspired neologism) used to end with:

So long as we hate pigs and pray
We’ll remain Moslem and Malay.

But in this book, ‘pigs’ is changed to ‘pork.’ What gives? Surely it’s the brute, squealing corporality of the beast that causes much offence to those people, not just the mere food.

Another one is his parody of Chairil Anwar’s rebel-yell “Aku”. In Salleh’s version, the narrator is a proud member of the bumigeois and can’t rebel his way out of a wet shopping-bag. Salleh’s original was called “Aku” as well, but the current version is called “I.” Yes, it’s a more accurate reflection of how a pampered middle-class Malay would talk, but the change is like giving away the punchline.

Yet another poem used to end with Purajaya – a non-existent town, but the very name is meant to evoke ridiculous pretense. Now the poem ends with Cyberjaya – a ridiculous name, we all know, but much less of a punchline.

I don’t know why Salleh made these changes, but these are relatively minor false notes when we consider the bawdy, raucous performance as a whole. Carpe diem!

Salleh Ben Joned is a true cult film idol. Whenever his in Bintang Malam or The Big Durian, ppl gor shock/syok by his apprearance.

i still have his namecard, which is fucking hilarious. i treasure it like hell.