Notes of a khalwat offender 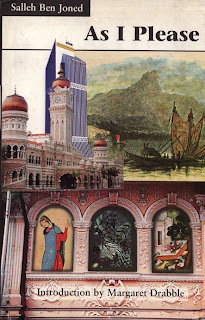 For a moment there, it looked like this week’s column would not appear. The Screamyx [sic] connection in my area being the way it is, I despaired at sending it on time.

This temporary anxiety turned out to be apposite in relation to our book for today. Salleh Ben Joned’s As I Please column ran for a few years in the 1990s in the Literary Page of The New Straits Times. It started out as a weekly but soon became quite erratic. The columnist would explain these absences by saying he was in a state of khalwat.

Gosh, was he really confessing to being holed up in hotel rooms with women to whom he was not married? Well, the original Arabic meaning of khalwat means ‘spiritual retreat.’ He thinks that its corruption in modern Malay-Muslim discourse to refer to a sexual offence is a perfect symptom of our debased values.

Salleh’s column was popular because it did not talk about mere (!) literature but invariably commented on several other cultural anxieties of the day. He was particularly concerned about the creeping institutionalisation of race and religion, those twin blights that have kept Malaysia from its true potential. He didn’t express these concerns in po-faced terms, as he was no bureaucrat. (No bureaucrat would have been allowed to skip work so often, for one.)

As an eager student of world literature, he can reference from the East and West, Down Under and up above, with equal ease. The title of his column came from George Orwell, but when translated into Malay it can also sound provocative: “Ikut suka aku!”

In the last of those pre-Internet days, when newspapers comprised our main source of written updates, Salleh’s column was indeed considered provocative. His Introduction states that the piece that got the most heated response was one in which he defended Salman Rushdie against the death fatwa called by the Iranians. Credit must be given to the newspaper editors at that time for not sacking him.

But, unfortunately, it was that very same paper that became the most reactionary of forces during the reformasi era. Reading this book now, you are left a little nostalgic for a time when genuine, lively debate seemed about to bloom in such a public arena. There have been sporadic shoots since then, of course, but most are too quickly smothered by our fears, our jealousies and our inherited, easily exploited paranoia.

There are heroes and villains here. The writers who celebrate truth and beauty in various forms are contrasted against the petty-minded sectarian types. The Lord Voldemort of his column (although that would be giving the Tan Sri too much credit) would be the head of a literary body that was very much concerned with keeping away ‘non-Malay’ influences from the sanctified realm of National Literature.

Some of the more thin-skinned of the literary establishment reacted by calling him all sorts of names. Even the late Rustam Sani was at his least sensible when he accused Salleh and his ‘colleagues’ of having a thing against Malay literature.

Be that as it may, it’s a shame this column was in English as it could have been seen as playing to the gallery, or even preaching to the converted. A Malay-language column would have hit right at the heartland, as it were, but a short-lived attempt in Berita Harian fizzled out. Ah, that dreaded khalwat strikes again!

Although Salleh has not been well, I await his next incarnation. He would be an ideal interview subject for short podcasts, methinks. (Some of what he says would be too scandalous for regular TV, after all.)

This 1994 edition, with its hilariously rojak cover (which I assume is a spoof of our Tourism Malaysa ads) marks the first time his columns were collected in book form. It’s now out of print, but there have been subsequent editions by other publishers. Silverfish has an extended remix, Nothing Is Sacred (Maya Press, 2003).

hey! i been looking for this book. where u get wan?

I bought it in 1994. Buy "Nothing Is Sacred" is available (though not in any MPH shop).

Amir I would dearly love to get hold of a copy of this book - the edition featured here.

Thank you for bringing it to my attention.

Salleh Ben Joned pinjam my phone once. To call his son. :)

And I hope he gave the phone back!

Hi, the last time I went to Da Huang with Cui Mui, but didn't see you around.

I think the idea of IKUT SUKA AKU reminds one of
ISA!